Automation of logistic processes in production are inevitable. Companies who anticipate can cope better with the industrial challenges in the future. Lack of space is always a challenge in production areas. Our AGV named Nipper excels in such areas thanks to its mechanical structure and navigation system. In combination with its transparent and flexible interface integration is a piece of cake. VistaPrint wanted to keep up with the trend of automation and was looking for a solution that could handle their tight production space. F3-Design and Nipper came to the rescue!

Ralf Conjour, Vista Project Manager, tells us more about the company: “The company was founded in 1995 by Robert Keane. Recently the company changed its name from VistaPrint to Vista and is on a journey to become the expert design and marketing partner to small businesses. VistaPrint is Vista’s print solution for small businesses and consumers and can support them in creating all kinds of products such as business cards, posters, flyers, clothing & bags as well as photo gifts, calendars, and invitations.”

In line with the trend for automation and increased efficiency in warehouses VistaPrint chose to implement the Nipper. The Nipper is a compact Automated Guided Vehicle (AGV) for unmanned internal pallet transportation that will save substantial amounts of manpower and insurance, as well as increase productivity.

Ralf: “At VistaPrint, we work ‘lean’ and we wanted to keep up with the trend of automation. We talked to our existing supplier of pallet transport. This supplier was unable to automate, because such short turning circles were not possible. We started looking for another supplier who could automate in a tight production space. We ended up with the Nipper from F3-Design. The Nipper was the perfect means to shape our lean thinking. We need a lot less manpower, and we work much more effectively. Since we use the Nipper, we experience fewer limitations due to personnel-related issues such as breaks, training and illness. This results in improved delivery reliability 24/7.” 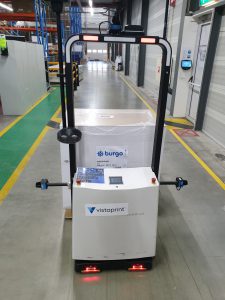 At VistaPrint we installed the first Automated Guided Vehicle (AGV) we produced: the Nipper. There has been an integration with the SAP system and the Fleet Manager controlling the AGV, that the software engineers were able to establish with the extended documentation we provided. Munish Agarwal, managing the team responsible for SAP enhancements and software engineers Sri Yanamandra and Kevin Doucet share their experiences with us.

Sri: “When we did the first initial roll out we were on S/4HANA 1809 and we were using Warehouse Management (WM) system back then. But since then we transitioned our Venlo’s WM system to the Extended Warehouse Management system (EWM). Within the same timeframe we were also able to upgrade from 1809 to 2020. So right now the AGV is connected to S/4 2020 with an EWM system.”

VistaPrint decided to add an middle layer to connect the SAP system to the Fleet Manager controlling the AGV. Kevin: “We have a service in between, so we are the once that actually mediate between the Nipper and SAP. We don’t necessarily want SAP to have to speak the language of the AGV and vice versa. We also added the middle layer from a security point of view. It makes more sense for our service to talk to SAP directly, that is why we chose to handle some translation between the two. We send a mission and then we pull data regularly to see the status (queue, adopted, realized) and depending on what it is then we send it back to SAP. Then it gets to whatever next status it is we are looking for.”

To create the middle layer and therefore the connection between SAP and the AGV F3 Design provided VistaPrint with an API script. Kevin: “The documentation provided was really straight forward. We had the specific set of fields we knew from SAP that we had to send. It was a small set of fields and parameters to deal with on the API set that we were calling. It was just a question of ‘Okay what thing am I getting out of SAP that goes into AGV?’. Once I knew that, it was pretty clear. And even in terms of pulling the status it was very straight forward, it worked very well. Like the API recalling, you have a From and a To and a Created time and it returns a Mission ID. So then you just keep calling with that Mission ID and ask what the status is for it.”

A quick and easy integration

Thanks in part to the clear instructions and good teamwork VistaPrint was able to release the SAP integration of the Nipper AGV in a relatively short time. Sri: “It took about 8 weeks, start to end for the entire project to roll out in Venlo. One week of design followed by technical meetings to make sure everybody was aligned. Then three to four weeks of building, one week of integration testing on the floor and the last week was the deploying of the solution and testing in production. Roughly from start to end 8 weeks. When we actually started the build phase it was a 6-week chunk.” Munish adds: “There were Venlo team members that worked very closely with us. The warehouse engineer who was responsible for providing some of the requirements, worked with you guys, doing the initial selection and we would work with him and others in Venlo. That was the model.”

The engineering team agrees that the documentation provided was straight forward and well written. For any company with a team dedicated to work on SAP integrations or SAP in general and the API part of the business an integration between SAP and the Fleet Manager controlling the AGV will be easily realized. Kevin: “If you understand and can work with SAP and API there is nothing complex about the realisation of the integration. We also appreciated the fact that there was a simulation that we could use, a test server. We have had projects in the past where we didn’t have that and that makes it very hard to run any kind of real tests. So, it was nice to have the simulation mode, in which we could put a virtual vehicle, a Nipper, and we could watch it go as if we were watching it on the actual floor. That was very helpful.”

Business and systems evolve. Therefore, it is important that any integrations made between systems are flexible and easily adjusted. Munish: “Since we deployed the AGV we have migrated from what is called a Warehouse Management system to an Extended Warehouse Management system. That was on the SAP side, the logistic side. The point is, we had to migrate and recode things to work in the new EWM within SAP and we did not have to call you guys. We did not have to reach out to you and say ‘Oh, now we are changing the backbone on the SAP side, we are not able to make this work’. The simulation tool was a great help, because as with your testing we could really see if things were getting delivered from point A to point B. I think that was very helpful. We didn’t have to change a whole lot on the API side. So, I think that is a win for the company, because even if you change the underlying backbone or systems, the APIs were pretty solid, so we didn’t have to come back and say ‘Oh there is a ton of additional recoding’ or had to come back to you for help.”

Sri and Kevin both agree. Kevin: “I would agree because that is my job, to make sure that communication remains invisible to the external vendors. The fact that the APIs were straight forward enough that even though the nomenclatures on the SAP side might have changed when we upgraded, because the straightforward nature of your APIs it wasn’t hard for us to figure out what should go for each field instead of what we originally had.”

Munish: “One thing that we have not done, is add another AGV.  I am sure down the road they’re going to ask to add more AGVs. Does it make it easier to add on more AGV to the system, to the configuration, to the setup? We do not know, but we feel confident that if we were to add another AGV it is not going to be a significantly different effort and that the APIs will be handled.”

There is a small group of people within a company who make the decision to purchase an AGV. Then you have the group of engineers who take care of the integration with the SAP system and the Fleet Manager controlling the AGV. But it doesn’t stop there. The most important group is the large group of people who ultimately have to work with it day in day out. Ralf: “In addition to the integration with SAP, it is also very important to pay attention to the integration of an AGV with the people on the shop floor. The people who are going to work with it must be aware of why the Nipper is there, what the Nipper does exactly and how they can ensure that it takes as much work off the hands of an employee as possible. F3-Design has provided us with excellent support in this regard. There have been many conversations with Willem Lepelaars from F3-Design. They also advised us to give our Nipper a name. Her name is Helga and with that we have made her more human. She is now part of the team!”

At F3-Design we strive for the best solution for our customers. That not only means presenting a plan, but also striving for a quick and easy integration. From A to Z we want our customers to have an optimal experience. We provide advice, information, instructions, training and service. So after the integration process you can operate with optimal efficiency and, when desired, completely independent.

Ralf: “F3-Design is an expert who can provide sound advice on the automation process in a production environment related to pallets. They look closely at what it is exactly you need, and they actively think along with you. They do on-site research and based on that they give advice on what suits your company best. If it turns out that an AGV is not the best option for you, they will say so and come up with the best solution for you. I really appreciate that honesty and expertise. As icing on the cake, a big plus regarding F3-Design is that they also have trained our people internally. As a result, we can easily adjust our mapping (route of the Nipper) ourselves. This is very exceptional for a company. Normally we have to call in the supplier for everything. Because we can now do this ourselves, it saves us thousands of euros. So when asked if we would recommend F3-Design, I say an absolute YES!”

If you are interested in the Nipper or have any questions left after reading this business case you can find more information on our website or contact us. 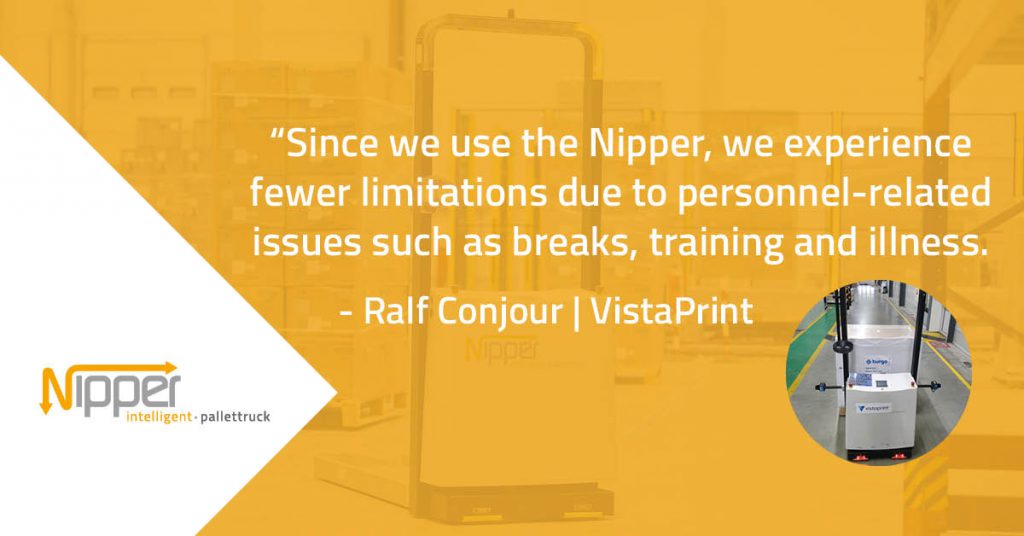